My name is Marcello Arrambide. And this is my story. I was born on April 11th 1984. In a small town called Merida in the country of Venezuela. Hold the pictures article on the left in mind when I tell you my story. Oh, and my town is in the far western portion of that map.


My mother and I came to the USA with nothing.

At the tender age of 13:
I was already working two jobs (under the table) not to buy what I needed, not what I wanted.

When I was 16:
Going to school while working four, count them, 4 jobs and doing extra-curricular activities like Football to the rest of of the world) and weight training. I was working towards my freedom.

When I was 17...:
Ditched every one of my extra-curricular activities to focus only on high school for 3 classes with OTJ training (on-the-job training)...I was the obsessive salesman, the quintessential “fanatical entrepreneur”. About those four jobs…One of them was burning CD's. Remember those little discs? I started as soon as the hardware/software came out; I burned and sold cd’s for around $5 a pop. And while I worked at the local bakery, I had the idea to take the leftovers to school and sold them to students the very next morning. Even the teachers and administrators eventually counted on me to have something for them. They were being thrown out anyway, so might as put them to good use. Waste not, want not.
I eventually went to New York City to find a contact in the People's Republic of China [mainland China] to have purses shipped to me directly, so I could sell them directly. I was doing everything possible to be the man in the middle or on top. Each rung on the ladder brought me closer to my freedom. The climb seemed endless...
And like clockwork, each and every summer, I would head out of town to take advantage of college courses to finish high school. I even did real estate and everything else possible to make ends meet. Working day by day and living paycheck-to-paycheck...I still didn’t know how I was going to pay for college. It seemed as far away as Never Never Land.


Working, going to school full time, all while trying to have a social life was just too daunting. But what can one do?

I was always anchored to a place, a specific location, always, always, having to “go back." How exactly was I to earning my freedom if I am relying on others to receive a paycheck? An allowance? A stipend? That was still dependency!  I wanted to be a master of my own fate and live life on my own terms. I was never any good at taking orders and working for someone else. I wanted to be able to work and live anywhere my heart desired and whatever pace I desired.


Marcello Arrambide as The Wandering Trader
Then one day, I heard about the incredible amounts of money made in Wall Street and the stock market. I immediately wanted to learn more.
By the way, I am now at age 18. Yes, 18 and just out of high school. I decided to take $25 grand in private student loans to finance my career. I was unprepared after performing too little in research spent nearly $10k on my first trading software to start day trading.
Life and the definition of success were never about money for me it was about being able to have my freedom. I worked full time, went to school full time, and pulled all-nighters 2 or 3 times every week and, AND, still managed to blow through those loans in a matter of months. Yes, you read that correctly. I will go ahead and underline that so there is no mistake: 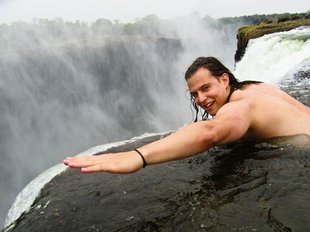 I was still working minimum wage! That was about $8/hour back then. The life you see me having on the left wouldn't happen until years, YEARS, later. Until then...Was I ever going to be able to re-pay that money? Should I borrow more money? Let alone even continue day trading since I was so trying to get my life in order?  I was undeterred--I’ve always been a man of strong convictions. I spent countless hours back-testing, spoke with a myriad number of traders, and finally, finally reached the beginning of what I would call true FREEDOM.
Fast forward to today: I have been successfully day-trading in the markets for approx. a decade. I have to work day-trading in the stock market for 1-2 hours a day and have decided to help others along the way. After all, how can you be a true master if you can’t teach what you do to others? With my Day Trading Academy using strategies I have developed over my career I have been able to train others to obtain their own financial freedom.

The only thing I truly need is high speed internet connection and a computer anywhere around the world. Upon this realization in 2009, I decided to start traveling and reached the point where I wanted to have a new lifestyle. My journey that has now taken me around the world many times and the thing I cherish most in this world is my ability to life a live on my own terms.
After visiting roughly 80 countries, all 7 continents and even getting kidnapped and detained in some of the most dangerous places in the world, I have decided to call Medellin, Colombia. But the difference is that now I chose to be there. I am opening a day trading center here in in the city of Medellin, where I will be training locals to learn how to day trade. We recently purchased a 5-bedroom penthouse here in Colombia to house the new center and set everything up successfully.

The Day Trading Academy has even started offering internships at one of the most prominent universities in South America, called EAFIT, to train others about finance and investing. So now we are fusing two of my passions: Day-trading and traveling. By creating day-trading centers around the world to create other traders that also wander the world.